ABOUT CEBU
Cebu is a province in the Philippines, consisting of Cebu Island and 167 surrounding islands. It is located to the east of Negros, to the west of Leyte and Bohol islands. Cebu is a long narrow island stretching 225 kilometers from north to south, surrounded by 167 neighboring smaller islands, that includes Mactan, Bantayan, Malapascua, Olango and the Camotes Islands. Cebu has narrow coastlines, limestone plateaus and coastal plains. It also has predominant rolling hills and rugged mountain ranges traversing the northern and southern lengths of the island. Cebu’s highest mountains are over 1000 meters high.ALCOHOL WITHDRAWAL Flat tracts of land can be found in the towns of Bogo, San Remigio, Medellin and, Daanbantayan at the northern region of the province. Its capital is Cebu City, the oldest city in the Philippines which forms part of the Cebu Metropolitan Area together with eight neighboring cities which include Lapu-Lapu City, Mandaue City, Talisay City, Naga City, Carcar City, Toledo City, Danao City, Bogo City, and other municipalities. The Mactan-Cebu International Airport, located in Lapu-Lapu City is only a twenty-minute drive from Cebu City, and is the second busiest airport in the Philippines. Cebu also holds the second largest international flights in the Philippines and is a significant centre of commerce, trade and industry in the Visayas and Mindanao regions.

WHY CEBU IS NO.1?
Cebu is one of the most developed provinces in the Philippines, with Cebu City as the main centre of commerce, trade, education and industry in the Visayas.

Even before the Spanish colonization, Cebu already played a vital role in trade and commerce in Asia because the island has been gifted with a natural harbor. Its channel is deep enough to accommodate the flow of goods through international cargo sea vessels, and the Mactan island serves as protection from winds and current.

Cebu’s weather promises to be good for business because typhoon activities are minor and rainfall is evenly distributed throughout the year. Moreover, the island is not located within any earthquake belt, there is no known active volcano, and its international airport has been large enough to connect the island to several continents.

The public administrators of the province have been known to be development-oriented, steering Cebu to greater heights by putting in place infrastructure facilities needed for economic growth.

Cebu has at least nine economic zones that offer to cut bureaucratic red tape by providing a much easier system for investors, plus incentives.

It is number one because of good fiscal management: it ranks highest among the country’s provinces in terms of assets and cash in bank.

There are many universities and other educational institutions that serve as magnet to students from other provinces, a major factor of a highly skilled and efficient workforce in Cebu.

Overall, Cebu continues to excel and investors are drawn to Cebu because of the culture of professionalism and craftsmanship among its people, the vast highly skilled manpower resources resilient amid trying times, its fair weather, relative peace and business-friendly atmosphere.

Be a Marketing Partner OR Join Me... 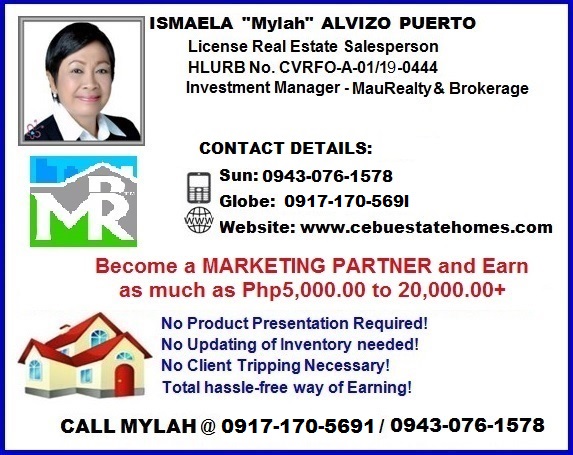 Join today and get updated with all the properties deal happening around.